The Heartbeat of the One Young World Opening Ceremony 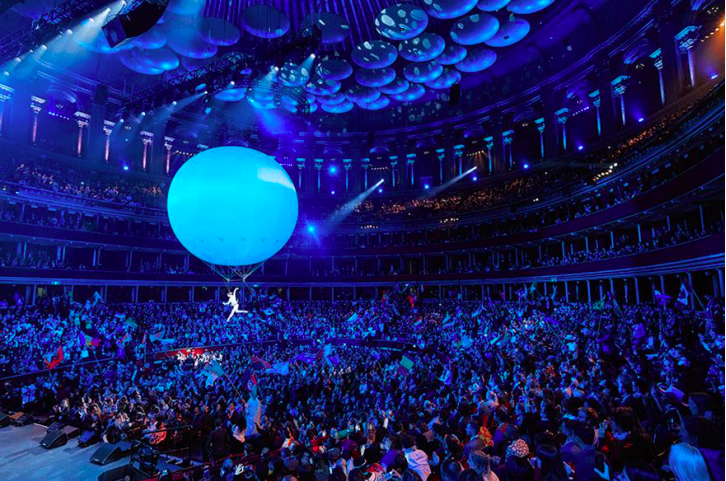 With 240 performers, a royal guest and some daring acrobatics, organising One Young World’s Opening Ceremony was a challenge.

The main objective of the opening ceremony was to welcome more than 2,300 One Young World (OYW) delegates to London, to kick off the OYW 2019 Summit with a party at the Royal Albert Hall.

It also needed to produce the Flag Ceremony with representatives from all of the world’s 201 countries taking part.

The ceremony aimed to celebrate what it means to be a Londoner with a two-hour spectacle of music, dance, theatre, art and fashion, showcasing London’s brightest young talent and reflecting OYW’s global message of youth, inclusivity, diversity and sustainability.

To showcase young London talent, the event assembled 106 singers from the Guilford School of Acting, 49 dancers from The Brit School, 15 circus performers from the National Circus for Performing Arts and 20 professional dancers. Private Drama, who organised the event, describes these young people as “the heartbeat of the evening.”

The event also featured the actor Warwick Davis as MC, a live band – which OYW had never had before – and conductor, Tansy Aked, who drove the show with over 25,000 bars of music.

“It perfectly articulated what it means to be a Londoner – vibrant, diverse, inclusive, energised and open to everyone,” said Adam Blackwood founder and creative director at Private Drama. “This was echoed in the speech by Lord Mayor, Sadiq Khan who declared London ‘open’.”

The event also took an environmental stand. Royal Ballet soloist and OYW counsellor, Fernando Montano, performed ballet from his Dance to the Sea, accompanied by cellist Yara Trofymchuk, as part of a piece to highlight pollution in the oceans. Elisabeth Hoff’s short film Drowning in Plastic, following the same theme, was shown on the big screens.

Young British fashion designers, Patrick McDowell and Phoebe English, were commissioned to design sustainable outfits for everyone on stage, a first for the event.

“We had a big financial challenge, but that just meant we had to be even more creative,” said Blackwood. “Time was the biggest challenge. Producing the opening ceremony was like creating a West End show in a day.

“We had to rearrange elements of the ceremony as it was happening, for example, we had suddenly to change the order to make sure the cast of Everybody’s Talking About Jamie! who were holding their own curtain, made it for their West End show,” he said.

Blackwood also admitted being “quite nervous” about the arrival of the OYW counsellors and the flag ceremony, from a logistical point of view and maintaining the energy in the theatre.

“Nikki Trow, my choreographer, and I decided to get our dancers to escort the counsellors to the stage which worked even better than I had hoped and all the footage showed our smiling young performers, wearing OYW’s sustainable outfits, arm in arm with the counsellors. It kept the party atmosphere brilliantly,” he said.

“It is a big challenge to keep everything flowing with extensive lighting and sound queues being rearranged live. With a cast of over 240 performers and a massive 700 backstage crew you have to ensure that everybody knows what they are doing, so clear communication is vital,” he said.

There were 5,000 people at the Opening Ceremony, of which 2,300 were delegates. Other attendees were representatives of charities, government ministers, press and guests.

OYW welcomed VIPs, including OYW counsellor, Meghan Markle, the Duchess of Sussex, as well as counsellors Bob Geldof, Ellie Goulding and Martha Lane Fox, among others.

There were 201 delegates in national dress representing every country, including a refugee flag, taking part in the flag ceremony. A particularly notable moment happened when North and South Korea embraced, and the crowd cheered in response.

The full live stream of the opening ceremony on Facebook has had over 41,000 views with an additional 10,000 views on the highlights video. The total views for all the videos live-streamed throughout the duration of the summit exceed 130,000 views.

“From a results perspective, it was our main goal to achieve a successful and seamless technical and creative production for OYW 2019. We are thrilled to say we did it,” said Blackwood.

OYW founders, David Jones and Kate Robertson, said afterwards: “Thank you for the most amazing opening ceremony last night. It was incredible. On every level. All of the counsellors last night were so excited and raving about it – and they’ve been to a lot of high profile events.

“Thank you for everything you did to give us the best possible start to One Young World and for giving all of us who were there lifelong memories!”