The rise of aerial dance 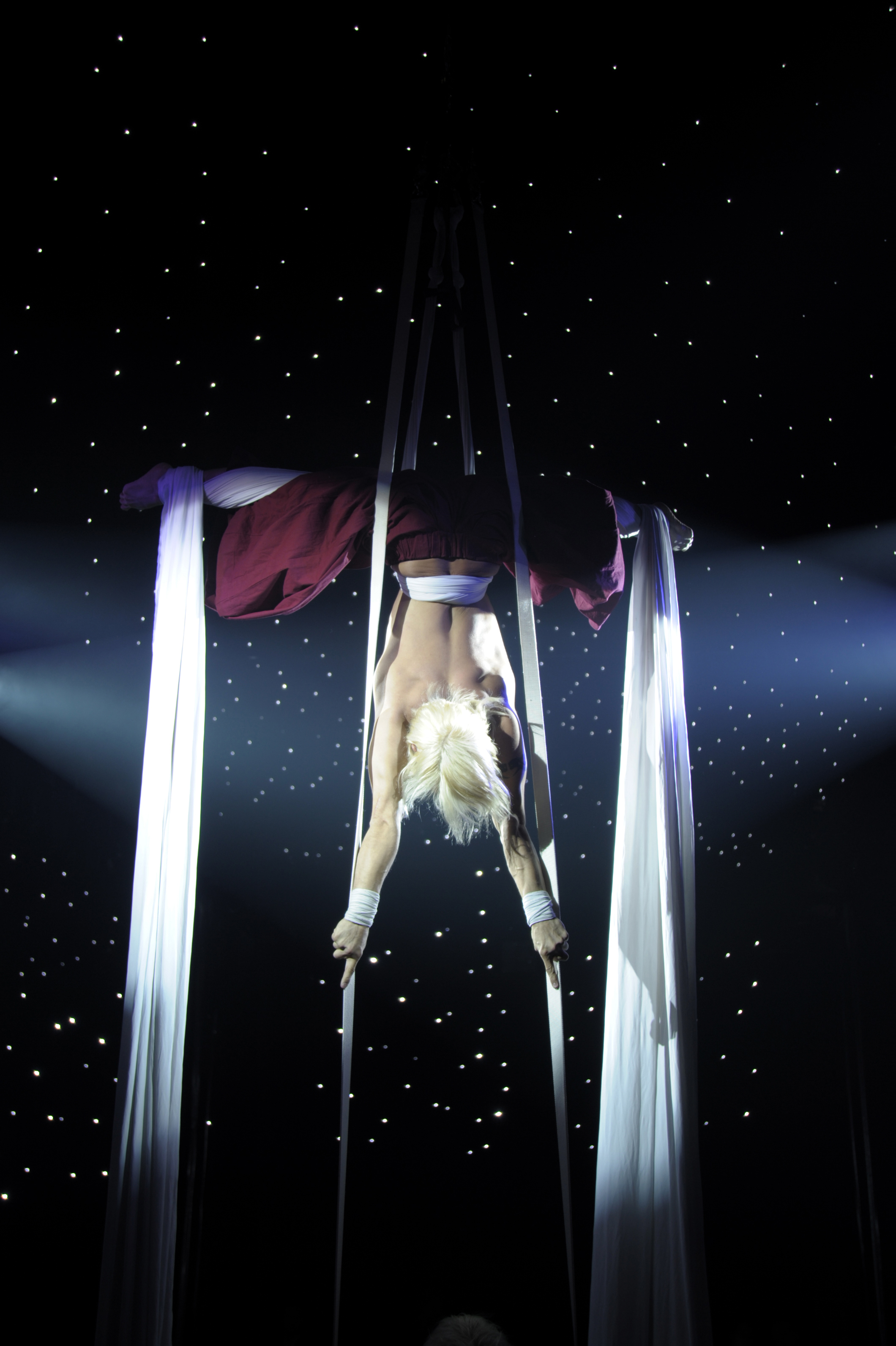 Credit: FOR USE BY PRIVATE DRAMA ONLY.

Aerial Dance (particularly with aerial silks) is a long-established circus art form that has in recent years gained mass appeal within the entertainment industry thanks to the unstoppable domination of producers such as Cirque du Soleil. Audiences flock to witness the gravity-defying performances that tell unforgettable tales and elicit huge emotional connections with the sheer grace, artistry and danger put on show. As they gaze up above them, spectators lose any sense of their earth-bound selves and can begin to project their own ambitions and dreams, because we all desire to experience something bigger than ourselves that can take us to another level. There is also something about this genre of performance that brings the architecture of a building to life by drawing the eye ever upwards.

Of all the circus skills, Aerial Silks is one of the most graceful, elegant and breathtaking disciplines. I believe the UK’s general appetite for aerial dance kicked off with the opening of the Millennium Dome in 2000 and a special multi media Cirque du Soleil style show featuring a myriad of different aerial skills including bungee trapeze that ran there for a year. This growth in opportunity for circus performers in the UK with aerial skills spawned companies such as the Generating Company and the demand for specialist training centres of excellence such as the National Centre for Circus Arts. And who can forget the famous BBC ident first shown in 2002 where Jane Osborn, Michele Laine and Melissa Merran tumbled elegantly in sparkling white down their crimson red silks from the ceiling of the Royal Horticultural Society Halls in Victoria? The sequence was so impactful that E4 did a spoof version for a French and Saunders Christmas TV Special.

Aerial performance has more recently even translated across entertainment sectors, most impressively with the brilliance of PINK combining live singing with astonishing feats of aerial dancing with silks at several of her recent Grammy performances. Now that Aerial Dance has proven itself time and again as an incredibly powerful medium in which to tell a story, it is a thrilling time to be an immersive event expert/organiser. Our field is quite literally reaching new heights as Aerial Dance performance is now a powerful trend in corporate storytelling at gala events.

Private Drama are regularly being asked to organise events that will astonish VIP guests with elaborate aerial entertainment. As champions of the art of performance, we have been at the forefront of infusing this art form in our projects, and have cultivated a dream team of aerial performers that are arguably the very best in the world.

To discover more about the latest trends in the aerial performance space, we sat down with international choreographer and longtime Private Drama partner Desiree Kongerod at Private Drama Headquarters.

Please tell our readers a bit more about your profession as an aerial dancer and chorographer.

It’s a very active one! I’ve always been quite athletic, and my aerial work ranges from trapeze, abseiling, webspin, hoop and aerial silk dancing. This led me to create my own business called An Act Above, and start working also as a choreographer. Now I design routines and often perform alongside several other superb dancers. I’ve been extremely lucky to have worked with some of the very best international aerial performers, and it’s always a delight to meet up to perform at amazing venues and events all around the world.

Audiences seem most taken with Aerial Silks. What makes it so special, for you?

Besides being quite breathtaking to behold, Aerial Silk dancing is extremely technical both in apparatus and physical control. Silks are generally folded into two strands ranging from 8–10 metres from the rigging point, which gives a very dramatic range to do tricks. For me, I guess it’s also exciting to master one of the newest circus performance art forms, and experiment with ways to make performances even more original than the last.

Are aerial silks made of actual silk?

No. A ‘stretchy silk’ is a 2 way stretch fabric usually made from a mixture of polyesters and elastines and/or Tricot Nylon. Aerial silks combine dance and circus skills very well and is very 3 dimensional, since you can see the routine from all angles.

Can Aerial Silks be considered a new fitness trend?

Absolutely. In fact, it is considered by some as the new yoga. It’s a fantastic way to get strong and fit and stick with it as it’s so fun and quite addictive. The allure of Circus is also a pull. There is an enticing element of danger and daring since you are totally relying on your own strength to keep you from plunging to the ground. The key to getting it right is actually less about learning ‘tricks’ – it is all about the quality of the movement and the energy applied to the transitions and the tricks that matters.

Yes, and it’s great to see them popping up all over the UK. There are several new and established Circus Schools that give aerial courses, such as: