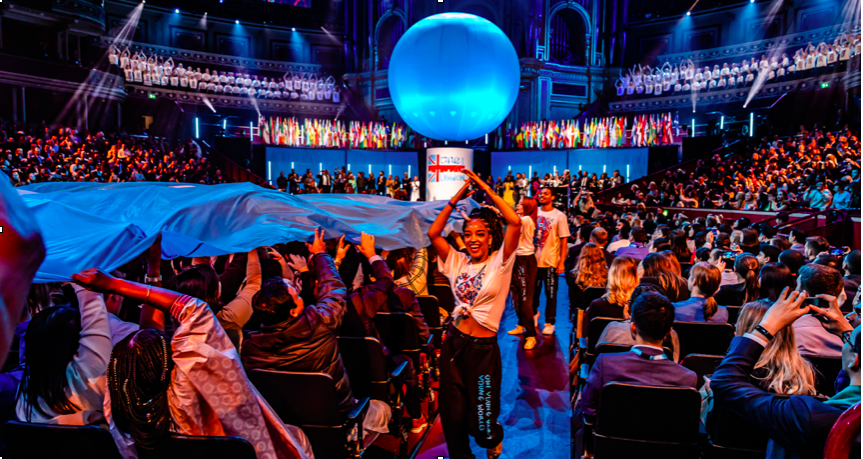 We produced the 10th One Young World 2019 Summit (22nd to 25th October) in London. It was the UK’s most international event since the 2012 Olympic and Paralympic Games. One Young World is a powerful advocacy platform that identifies, promotes and connects the world’s most impactful young leaders (between the ages of 18-30) to create a better world, with more responsible, more effective leadership. 2000 delegates from 190+ countries were counselled by 60+ influential political, business and humanitarian leaders including Richard Branson, Jane Goodall and Meghan Markle, amongst many other global figures. One Young World’s brief was to produce an Olympic-style Opening Ceremony at the Royal Albert Hall and three days of conferences and a Closing Ceremony at Central Hall Westminster, with live streaming of all content.

The Opening Ceremony is traditionally a spectacular show that entertains and delights. Never before had it been used to inspire the delegates with the power of hope and positivity. We transformed the Ceremony to capture the spirit of youth-led change and set a powerful positive energy in motion that pervaded the entire conference. Despite a challenging budget of £400K to cover the entire week, we delivered a conference that went above and beyond the client brief with the vital emotional fuel to spark productive conversation and ignite fantastic work.

Researching the One Young World values, we immersed ourselves in the spectrum of One Young World’s works. Producing a two hour show with a clear narrative, we formed an incredible ensemble of over 250 young performers to reflect the values of diversity, inclusivity and embody the spirit of youth and hope. Drawing upon our knowledge of upcoming talent within the creative industries, we paired young people (between the ages of 16-21) from RADA, the Brit School, the GSA and the National Centre for Circus Arts, with industry professionals to ensure a fresh, raw and exciting cast – to declare: London is a place for change, together we are stronger and this One Young World generation has the power to save the world!

Central to the show was a performance by Royal Ballet Soloist Fernando Montano, followed by a screening of a short film by photographer and activist Elisabeth Hoff. Both supporters of the Marine Conservation Society, Montano danced his version of the ‘Dying Swan’, portraying the death of precious wildlife due to ocean pollution. Decked in a costume of recycled plastic feathers, the reality of his performance was underlined by the glistening images and statistics of Hoff’s film ‘Drowning in Plastic’. This moment of sombre reflection was integral to the authenticity and integrity of the show.

Celebrating gender fluidity, the cast of Everybody’s Talking About Jamie! performed two numbers telling the vital story of overcoming prejudice and embracing who you are. What’s more, we placed women in the industry centre stage working with a female musical director, choreographer, DJ and one of the few female black opera singers, graduate of the Royal Opera House’s Yette Parker Foundation, Francesca Chiejina.

During the production of the three day conference at Westminster Central Hall we did not drop a ball and managed the unique scope of the logistical operation from making live script changes, dealing with high profile speakers some with high personal security, like JK Rowling, to coordinating 2200+ international delegates from across the globe, some of whom had never left their countries before. This was across multiple locations in the heart of politically tumultuous London with Extinction Rebellion and Brexit protests right outside! The 48 hours of plenary sessions were live streamed reaching more than 130,000 views on Facebook during the conference.

We truly became integrated members of the One Young World team. The co-founders expressed that nobody had ever understood and helped create the One Young World magic like us. We subsequently have been selected to do their inaugural New York fundraising Gala in May.

Delegate Feedback (of those who completed the survey)